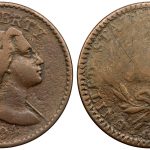 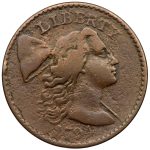 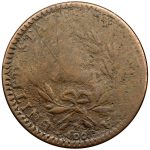 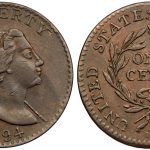 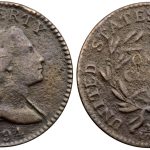 1794 S-48 R5 Starred Reverse G6. The obverse is sharper than the reverse, as always on this variety, perhaps a 10/3+ split in terms of detail. Mostly smooth but there is minor roughness in the fields and protected areas on the obverse. No verdigris and only a few minor marks. A narrow planchet void along the dentil tips from K-6 to K-9 on the obverse (as struck), a light rim bruise left of the cap, and two very fine scratches down from AT in STATES are the only notable marks. Mostly glossy medium chocolate brown. About two-thirds of the tiny stars remain visible, strongest on the left side of the reverse. Later die state, Breen state III, with obvious swelling on the reverse. Graded F15 net G5 and tied for CC#27 in the Noyes census, his photo #24302. Pete Smith (The Story of The Starred Reverse Cent) #6-C where called “G6; perhaps underrated because of late die state.” An attractive lower grade example of this rare and very popular “Redbook” variety.

We will verify that we still have the coin in stock. We will contact you for shipping costs.